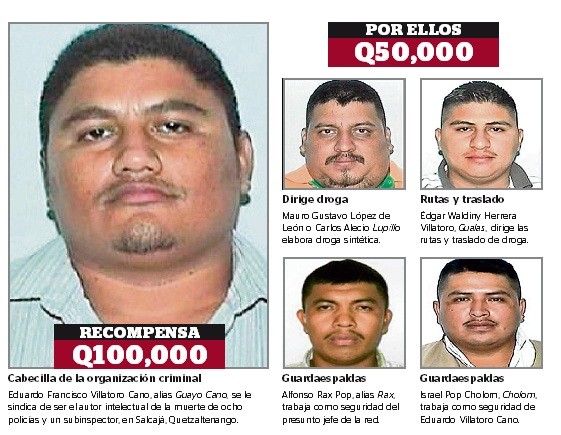 By Richard Fausset
October 4, 2013, 5:54 p.m.
MEXICO CITY — An alleged drug cartel leader suspected of masterminding the June slayings of nine Guatemalan federal policemen was arrested Friday in the southern Mexico border state of Chiapas, officials said.
The suspect, Eduardo Francisco Villatoro Cano, became one of the most wanted men in Guatemala after more than a dozen armed men believed to be allied with his drug-running organization stormed a police substation June 13 in Salcaja, a municipality near Quetzaltenango, the country’s second-largest city.

The assailants fatally shot eight officers and abducted a police sub-inspector, whose partial remains were found later. The attack may have been in retribution for a cocaine seizure.

Friday’s arrest of Villatoro, who went by the nickname “Guayo,” comes amid increased cooperation between Guatemalan and Mexican security forces,  who are trying to combat the growing presence of drug trafficking cartels on both sides of their shared border.

The political importance of the matter was emphasized by the fact that Guatemalan President Otto Perez Molina called a news conference to personally announce the arrest. Perez Molina, a conservative and former Guatemalan army officer, was elected in November 2011 on a promise to get tough on crime.

But even before the massacre at Salcaja, Perez Molina’s popularity in Guatemala was slipping due to perceptions of continuing insecurity. (link in Spanish) Guatemala is experiencing one of the highest crime rates in Latin America, in part because of deadly squabbling among drug cartels for control of cocaine transshipment routes. Roughly 90% of South American cocaine headed north to the U.S. passes through the Central American country, according to a United Nations report released last year.

Perez Molina on Friday praised his country’s law enforcement officials for their role in the arrest, saying they “had excellent coordination with the Mexican authorities…. This concludes a successful operation that resulted in the capture of those responsible for the massacre.”

Villatoro’s base of operations was in the Guatemalan department (or state) of Huehuetenango, which shares a long, wild and uncontrollable stretch of border with Mexico’s Chiapas state. Though Villatoro is Guatemalan, Mexican prosecutors have linked him to the Gulf cartel based in Mexico, according to a Guatemalan news release.

After the shooting, the Guatemalan government launched an effort called “Operation Dignity” that targeted Villatoro’s operation and resulted in the arrest of 34 suspected members. In July, Guatemalan Interior Minister Mauricio Lopez Bonilla told national news outlets that the group was responsible for more than 100 homicides. (link in Spanish)

A suspected deputy of Villatoro was also arrested Friday. Perez Molina said the men would be deported to Guatemala.

Above: The wanted poster for Guayo Cano, via SDPnoticias.com.