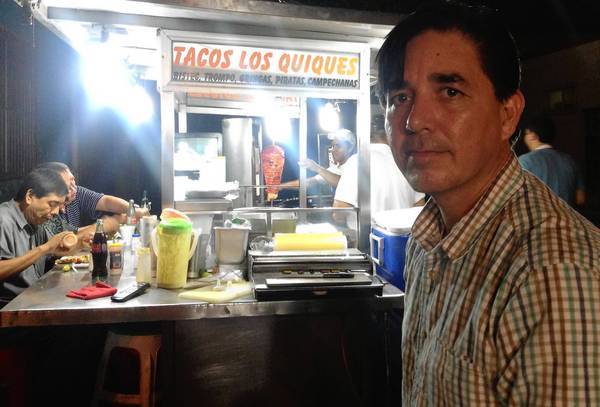 The Mexican city, roiled by drug violence since 2010, has made notable strides, but the battle is not yet won.

MONTERREY, Mexico — It is one of those small, hopeful signs that this traumatized city may be awakening from the nightmare of Mexico’s drug wars: Armando Alanis once again feels safe enough to stop off for a late-night nosh at Tacos Los Quiques, a beloved sidewalk food cart.

“We couldn’t have done this two years ago,” Alanis, a 44-year-old poet, said recently as he chowed down on tacos gringas in the dim glow of inner-city streetlights. “It would be wrong not to recognize what we have regained.”

But Alanis, like most residents of Monterrey, knows that he lives in a city that is only half-saved. That night, he would drive over the cobblestone streets of Barrio Antiguo, once the premier night-life zone, pointing out the near-lifeless streets that previously were packed with revelers. He pointed to the bullet holes in the wall of the Cafe Iguana, where four people were slain in May 2011.

Later, he would drive to the Casino Royale, where the ruthless Zetas drug gang set a fire that killed more than 50 people that year. The building remains a burned-out husk, its fence adorned with white crosses commemorating the dead.

These days, the headline-grabbing horrors that exploded three years ago — the running street battles, the dumped or hanging bodies — are less common. The number of homicides has plummeted, on track to be less than half this year what it was in 2011. A new state police force, vetted and well paid, patrols the streets in place of the old corrupt one.

The conversation about just how far Monterrey has, or hasn’t, come recently has been revived by a series of grisly crimes that appear to be linked to business owners’ failure to pay “protection money” to criminals: The butcher shot in the head Sept. 5. The bakery supply salesman slain Sept. 24. The four patrons of a suburban bar killed by gunmen Sept. 26, their deaths apparently a message to the owner to pay up.

“The situation continues to be a delicate one,” said Gilberto Marcos, a Monterrey businessman and the president of a neighborhood coalition. “We’re not ready to proclaim victory.”

The new state police agency, called the Civil Force, has been touted by Mexican President Enrique Peña Nieto as a model for the country. But lingering challenges in Monterrey, the capital of Nuevo Leon state, demonstrate that solving Mexico’s deeply ingrained organized crime problem will require more than just swapping out old cops for new ones.

Moreover, many here believe that the plummeting homicide rate is the result of one group of organized criminals — the Gulf cartel and its allies — defeating its rival, the Zetas, in the bloody struggle for control of the city. Implicit in that theory is skepticism about the government’s ability to affect the drug war at all — a suspicion that officials would have as much luck trying to control the weather.

Though trouble had been brewing for years in Monterrey’s rougher neighborhoods, the peace was fully shattered in February 2010 as the Zetas, the former armed faction of the Gulf cartel, began fighting its former bosses for control of the city’s retail drug trade and lucrative drug shipment routes to the border, less than three hours north.

The city’s homicide rate skyrocketed by 300% from 2010 to 2011, reaching 700 deaths. Residents, and the nation, were shocked: Monterrey had long been one of Mexico’s wealthiest, safest cities and home to important textile, beer and construction industries. Many members of the business-owning elite fled to Texas or Mexico City. The U.S. government ordered the children of its diplomats to leave town. Get-togethers with friends and relatives moved from public to private spaces.

It was a reality that many swaths of Mexico suffered, and continued to suffer. But Monterrey took advantage of its wealth and the strength of its business community, which agreed to higher taxes to fund the Civil Force after many police officers in the old force were found to be collaborating with the cartels or otherwise untrustworthy.

The Civil Force, now 2 years old and 3,500 officers strong, is the defining achievement of Nuevo Leon Gov. Rodrigo Medina, a member of Peña Nieto’s Institutional Revolutionary Party. Applicants must pass relatively strict background tests and must never have worked as police officers. The unit’s members live in barracks for weeks at a time; their pay is high by Mexican standards; and their perks include scholarships for their children, good health insurance and subsidized housing in police-only neighborhoods.

Today, the helmeted, heavily armed officers and their blue pickup trucks are a common sight on the streets of Monterrey. Medina said he plans to double the size of the force in the next two years, and it is hoped that the officers will replace the undisclosed number of army, navy and federal police personnel who continue to patrol here, perhaps the most overt reminder that normality has not fully returned.

Father Agustin Martinez, a Roman Catholic priest in the crime-ridden neighborhood of La Independencia, said the new police, while not perfect, have proved to be more vigilant and trustworthy than their predecessors.

Martinez, 31, has lived in this desperately poor neighborhood for three years. He has seen bodies that have been cut up and dumped on the street in plastic bags. On a recent morning, he offered a tour of the narrow streets that snake up a steep hill jammed with concrete homes and tin-roofed shacks.

When he arrived here, Martinez said, “there were streets you couldn’t pass after 7 p.m., because the bad guys would block them off.” Young lookouts stationed on street corners would call in news of unwanted visitors to their drug cartel bosses farther up the hill.

The Civil Force, he said, has gained the trust of many residents and persuaded them to report more crimes. The officers regularly stop and check the cellphones of children suspected of being lookouts.

At the same time, he said, the government has become more involved in the community, opening a massive center that offers classes in carpentry, baking and hairdressing to help residents start their own businesses. On a recent morning, the classrooms were packed, while outside, scores of residents waited in line to buy subsidized groceries as part of a state anti-hunger program.

Martinez said that all of this has helped, but he was wary of giving too much credit to government programs. He subscribes to the theory that officials allowed the Gulf cartel and its allies to beat back the Zetas, who are considered the most bloodthirsty of the drug gangs, in an effort to stabilize the city.

In his state of the state address this month, Gov. Medina cited polling that showed 83% of residents approve of the Civil Force. He said business robberies were down 54%, vehicle thefts down 80% and that a new anti-kidnapping unit had resolved 96% of the cases that had been reported to authorities. His tone was hopeful, but modulated by reality, as he acknowledged “the great problems that we recognize, and that we still have to resolve.”

Alfonso Verde, head of the Nuevo Leon Citizen Security Council, laid out a few of those remaining problems. The new police officers, he said, were good at patrolling, military-style, through the streets, but “they don’t make contact with the population.” Nor are they charged with investigating crimes, a task still reserved for the state prosecutors’ office.

Meanwhile, Verde said, corruption at the municipal level continues to be a serious problem, and many police officers in greater Monterrey are municipal cops. And although Nuevo Leon was one of the first states to begin moving toward a U.S.-style justice system, introducing oral trials in 2004, some critics say the process has been poorly designed and implemented.

Verde said crimes such as extortion continue and are rarely reported to authorities: A recent federal government poll found that 343,000 extortion attempts had gone unreported last year in Nuevo Leon. Many victims doubt that justice will be done.

“We haven’t generated the kind of police who are scientific, capable, honest, who can investigate and make the citizenry feel that whoever is a victim of extortion can count on the support of the authorities,” he said.

And so Monterrey lurches into the future, unsure how far behind it has left its bloody past.

After his tacos, Alanis drove to his little house downtown. A few years back, he built a two-story wall that totally obscures the building, after a bout of gunplay left a dead stranger bleeding on the pavement a few steps from his front door.

It was after midnight. Alanis gave a wave to his next-door neighbors, who were out drinking beer in their concrete yard. They were exposed to the street, but locked in behind an iron gate — half-cautious, half-bold, a calculation well-suited to the times.

Cecilia Sanchez of The Times’ Mexico City bureau contributed to this report.