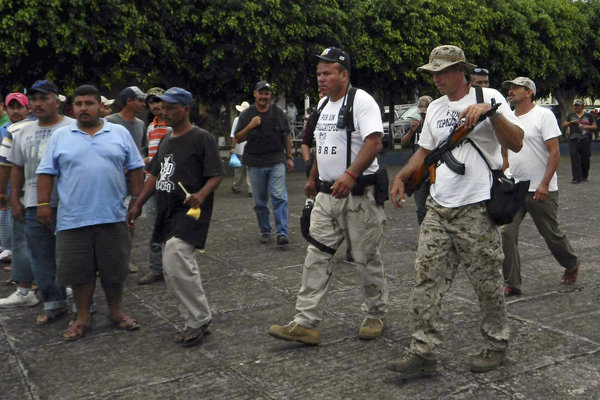 MEXICO CITY — The availability of heroin and methamphetamine in the U.S. is on the rise, due in part to the ever-evolving entrepreneurial spirit of the Mexican drug cartels, according to a new study released by the Drug Enforcement Administration.

The report, which analyzes illicit drug trends through 2012, also notes that cocaine availability was down across the United States. It offered various possible reasons for the decline, including cartel versus cartel fights over drug routes in Mexico, declining production in Colombia and various anti-narcotics strategies that have put more heat on the groups that control production and shipment of the product.

The yearly report, released Monday and known as the National Drug Threat Assessment Summary, is an effort to describe “the threat posed to the United States by the trafficking and abuse of illicit drugs.”

The report is a synthesis of quantitative data and survey feedback from more than 1,300 state and local law enforcement agencies. Among other things, it provides an updated profile of the seemingly intractable user-pusher relationship that has developed between the United States  and its southern neighbor.

According to the report, the amount of heroin seized at the southern U.S. border increased 232% between 2008 and 2012 — apparently the result of greater Mexican heroin production and a growing incursion by  Mexican traffickers into U.S. markets. It notes that the U.S. is experiencing a “sizable increase” in the number of new heroin users.

Methamphetamine seizures at the Mexican border, meanwhile, increased fivefold in the same time period, although the report notes that U.S. demand and abuse data for meth appeared to remain stable.

The trouble with meth is most acutely felt in the West: The report notes  that 2011 arrest data showed that large percentages of arrestees in Western states tested positive for meth, with rates much lower in the East. For example, 42.9% of men arrested in Sacramento tested positive for methamphetamine; in Washington, DC, that number was 0.4%.

Marijuana continues to be Americans’ illicit drug of choice. Smuggling from Mexico has remained “consistently high” for 10 years, the report says, while U.S. domestic production is on the rise — in part due to large-scale U.S. growing operations controlled by Mexican traffickers.

The U.S. government appears to be tolerating recent decisions by voters in Washington and Colorado to legalize marijuana for recreational use in those states. But the plant remains classified as a dangerous and illegal controlled substance under federal law, and the report warns, darkly, that drug cartels will “increasingly exploit the opportunities for marijuana cultivation and trafficking created in states that allow ‘medical marijuana’ grows and have legalized marijuana sales and possession.”

The report notes the continued decline of availability of cocaine in the U.S., a trend that began in 2007. The majority of cocaine that ends up in the U.S. is of Colombian provenance, and much of it must first travel through Mexico. The United Nations has noted a decline in Colombian coca production, and U.S. officials have credited the success of Plan Colombia, the United States’  multibillion-dollar drug-fighting effort in Colombia, which includes, among other things, military aid, crop eradication programs and social spending.

Critics of U.S. drug policy fear that the pressure on Colombia is only pushing production to other countries, like Peru, a phenomenon commonly known as the “balloon effect.”

The title of “fastest growing drug problem” in the U.S., according to the report, goes to prescription drugs, including painkillers, which are often obtained domestically at unscrupulous “pill mills,” or from online sellers.

The report says that recent state laws to crack down on pill mills could create another kind of balloon effect, forcing “abusers and distributors to obtain [prescription drugs] in other areas of the country where little or no legislation currently exists … or in other countries such as Canada and Mexico.”

Photo: Vigilantes arrive in the town of Pareo, in Mexico’s Michoacan state. The Knights Templar drug cartel controls parts of the state, and a “self-defense” movement has arisen to fight it. (Agencia Esquema /November 16, 2013, via LA Times)