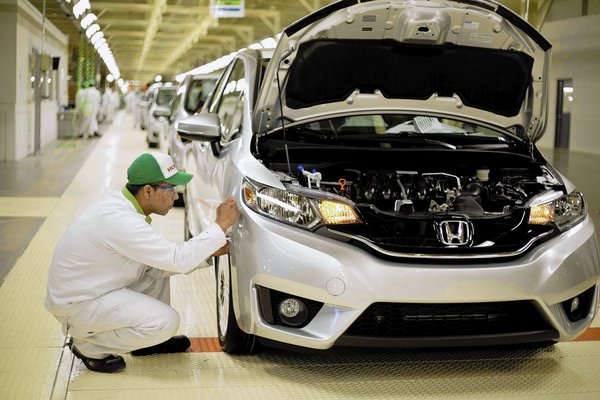 Mexico accounts for about 18% of North American auto production, and auto industry employment there has soared 46% to about 580,000 jobs since 2009.

The first Honda Fit rolled off the assembly line Friday at a new $800-million factory near Celaya, Mexico, a symbol of the growing might of the country’s auto industry.

Honda’s U.S. factories spit out hundreds of thousands of Accords and Civics each year. But when the automaker redesigned the Fit for North America, it turned to Mexico for an increasingly skilled workforce and favorable export rules.

Mexico already accounts for about 18% of North American auto production, but that’s expected to jump to 25% by 2020 as automakers pour billion of dollars into factories, said Joe Langley, an analyst at IHS Automotive. The nation has joined Germany, Japan and the U.S as one of the heavyweights of auto production, he said.

U.S. auto factories have also kicked into a higher gear since the recession as auto sales have rebounded. But Mexico’s plants are adding jobs and production even more quickly.

Mexico’s auto industry employment has soared 46% to about 580,000 jobs since 2009, according to the Brookings Institution. U.S. auto employment has gained 16% in the same period.

Other U.S. manufacturers — especially high-value industries such as aerospace and electronics — also will see new competition from Mexico’s industrial ascendance, said Mark Muro, a policy analyst at the Brookings Institution.

Mexico is also positioning itself as a global player in high-tech manufacturing. The nation’s federal government boasts that more than 100,000 Mexicans graduate each year prepared for careers in engineering and technology. The aerospace industry in particular has boomed, with exports of more than $5 billion in 2012, a 16% increase over 2011.

Companies such as General Electric and Honeywell develop new turbines in Mexico, and numerous companies build engines in relatively new high-tech centers such as Queretaro in the central Mexican region known as El Bajio. Aircraft company Bombardier has rapidly ramped up production in Mexico, where it now builds major aircraft components.

“The auto industry is critical, because it is among the most sophisticated of manufacturing technologies,” he said. “If you can build a Honda Fit, then almost all other manufacturing is vulnerable.”

Southern U.S. states have in recent years lured many new auto plants with lower wages and other enticements. But labor costs in the U.S. are now leveling out, Muro said.

“Mexico is the new South — the low-cost alternative,” Muro said.

Nowhere is this more evident than in auto production, driven by free-trade agreements and an export push to Europe, the U.S. and Latin America, said James Rubenstein, an auto industry analyst and geography professor at Miami University in Oxford, Ohio.

“Mexico is hot, hot, hot right now,” Rubenstein said. “While trade agreements are a controversial issue in the U.S., Mexico has embraced it fully, and it is now very easy to export out of Mexico.”

Mexico has a network of 11 free-trade agreements covering 44 countries, many in Europe and North and South America, according to the Mexican government. Mexican autoworkers earn about $8 an hour, according to the Center for Automotive Research, compared with the U.S. average of $37.

“You can’t compete solely on labor costs,” he said. “Mexico is developing a good supply chain and a good enough technical workforce to be very competitive. Meanwhile, it offers a strong international platform.”

“For a while, Mexico was feeling the heat from China,” Rubenstein said.

Now it’s the other way around. Mexican labor costs are higher, but the overall cost of doing business and exporting products is lower. The Mexican plants, for example, have good access to both sides of the Panama Canal.

“The quality also is higher out of Mexico,” Rubenstein said.

That played into in Honda’s decision to locate its subcompact car factory in Mexico.

“We are very confident that the products we build there will provide outstanding quality,” said Rick Schostek, senior vice president at Honda North America.

The Celaya factory will employ 3,200 when it reaches full production this year. Honda also is building a $470-million transmission plant in Celaya that is scheduled to begin production in the second half of 2015 with 1,500 employees.

Elsewhere in Mexico, a new Nissan plant opened last year, and Mazda is starting production of its Mazda3 compact car at a Mexican factory this year. Volkswagen’s Audi luxury brand last year broke ground on a $1.3-billion factory near Puebla, Mexico, near where VW assembly plants already build the Jetta, Golf and Beetle for the U.S. market. Mercedes-Benz is also considering locating a plant there.

Mexico has a long history of auto assembly. Volkswagen recently celebrated its 50th year of building cars there. But Mexico’s production is projected to double to more than 3 million this year compared with 2009, according to IHS Automotive.

Mexico’s share of North American auto industry jobs jumped to 39.1% in 2012 from 27.1% in 2000, according to the Brookings Institution. Expect that share to keep growing as auto companies open more factories in Mexico. Meanwhile, there are no new auto factories on the horizon in the U.S.

As auto manufacturing has flourished, so has the supply chain to feed those plants. Mexico has become the fifth-largest producer of auto parts in the world after China, Japan, the U.S. and Germany.

“We will be more attractive to the world for making investments, for generating jobs in Mexico,” he said. “At the same time, these jobs are better paying…. That will allow us to create more of a sense of well-being for Mexican families.”

Hirsch reported from Los Angeles and Fausset from Mexico City. Cecilia Sanchez of The Times’ Mexico City bureau contributed to this report.

Photo: The first Honda Fit rolls off the assembly line at a new $800-million factory near Celaya, Mexico. Volkswagen recently celebrated its 50th year of building cars in the nation. (Honda / January 23, 2014, via LA Times)