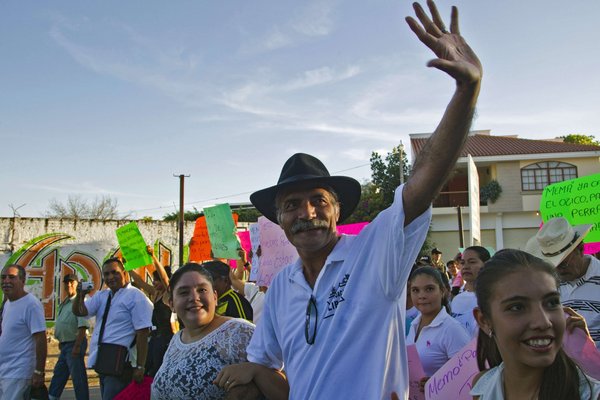 By Richard Fausset and Cecilia Sanchez
April 7, 2014, 4:10 p.m.
MEXICO CITY—A key leader of the vigilante “self-defense” movement in Mexico’s Michoacan state said Monday that he was refusing a government order to disarm, and roadblocks to keep out federal forces charged with taking away the vigilantes’ weapons were reported in numerous cities.

Vigilante leader Jose Manuel Mireles said in a radio interview that the government had not sufficiently pacified the state. “Armed and masked” drug cartel members began appearing in the streets just hours after the government’s announcement last week declaring it was time for the vigilantes to disarm, he said.

“For that reason we are reinforcing our trenches,” Mireles said. “We are going to lay down the arms when the federal government and the state have finished the work of cleaning the state of Michoacan of criminals.”

In a number of Michoacan cities over the weekend, residents supporting the vigilantes protested the government plan to send home the so-called autodefensa militias, which have portrayed themselves as protectors of the people against the depredations of the Knights Templar drug cartel.

“No to the disarmament of the autodefensas,” read one typical sign waved by a protester in the municipality of Mugica.

Mexican federal authorities had declared in a news conference Thursday that it was time for the vigilante groups to disarm, arguing that the government had arrested or killed a number of key Knights Templar leaders.

The newspaper Reforma reported Monday that 27 highways had been blocked Sunday by self-defense groups to prevent military convoys from entering certain areas.

In an interview with The Times on Monday, a federal government official charged with resolving the Michoacan crisis said there was “much collaboration” between the vigilantes and the government: “The majority of the leaders of the self-defense groups in Tierra Caliente agree with the disarming. In the next few days these actions will continue until every one of these groups have turned in their weapons.”

When asked what would happen to those vigilantes who refused, the official, who requested anonymity because he was not authorized to speak publicly, replied: “They have to turn in [their weapons]. Period…. There is no other option.”

Reestablishing the government’s monopoly on the use of force in Michoacan has been one of the enduring challenges for the administration of Mexican President Enrique Peña Nieto. Until recently, the government has worked side-by-side with some of the vigilantes to help cleanse the region of cartel members, even as the integrity of the vigilante movement has been called into question.

Two autodefensa leaders have been arrested in connection with separate homicide cases, and the Mexican attorney general has said that at least some of the vigilante weapons were supplied by a rival drug cartel.

At least two people were killed in January when Mexican federal authorities clashed with recalcitrant self-defense group members in an effort to disarm them.

The man believed to be the top boss, Servando “La Tuta” Gomez, remains at large.

On Saturday, federal authorities detained Michoacan’s interior minister, Jesus Reyna, after determining that he had “possible contacts with criminal organization,” though Reyna has not been charged with a crime.

Photo: Jose Manuel Mireles, a leader of a vigilante self-defense group in Mexico’s Michoacán state, waves during a march in Tepalcatepec to celebrate the first anniversary of the groups’ founding. The groups have been ordered to lay down their weapons. (HECTOR GUERRERO / AFP/Getty Images / February 24, 2014, via LA Times)