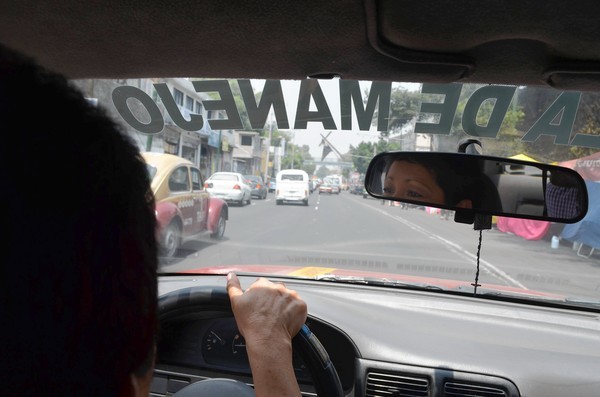 Driver’s ed in Mexico City: White knuckles all the way

Mexico City doesn’t require adults to pass an exam for a driver’s license, but there are driving schools for ‘nervous people’ who are afraid of the wild roads.

STORY AND PHOTOS BY RICHARD FAUSSET

Pedro Cervantes was speaking with his teaching voice. It was clear and almost mystically calm — the kind of voice you’d want talking you through the emergency landing of a passenger plane:

This is the steering wheel, he said. Hands at 10 and 2. This is your gas gauge.

Cervantes was in the passenger seat of a red, four-door Nissan compact from the Harvey Driving School, giving Patricia Sanchez, 52, her first lesson in how to drive.

Or, more specifically, how to drive in Mexico City, a seemingly infinite maze of daredevils and incompetents, of axle-bending potholes and curb-hugging taco stands, of signless seven-way intersections and baffling multidirectional traffic circles, of tamale vendors on tricycles and cops hungry for bribe money.

It’s a place with 4.5 million motorized vehicles, a place where someone is killed or injured in a traffic accident every hour, yet adults don’t have to take any sort of exam to receive a driver’s license.

But Sanchez, a retired social security agency worker, soft-spoken, with pink lipstick to match her nails, was looking for some peace of mind.

On the side of Cervantes’ Nissan, blocky yellow letters spelled out: “ESPECIALISTAS EN PERSONAS NERVIOSAS.” Specialists in nervous people.

This is the lever for the turn signal, he told Sanchez. This one works the wipers. Here are the pedals: El clutch, el freno, el acelerador.

In Mexico City, driver’s exams for adults were phased out in 2001 after widespread corruption was discovered among test administrators. These days, aspiring license-seekers can simply show up at a government office with an ID, proof of residence and 626 pesos, or about $50.

City officials recently announced that an exam of some kind will again be required for adult applicants next year. That should be good for business at the capital’s 29 licensed driving schools. For now, many of their customers are adolescents, who must show they took a driving course to qualify for a license. The rest are adults like Sanchez, the personas nerviosas.

She had paid 1,000 pesos, or about $80, for three two-hour lessons, consisting of a one-hour review of the controls, five hours of hands-on driving and a photocopied sheet of paper with basic, seemingly random tips: “Don’t look at airplanes,” “Don’t put your faith in good luck.”

Traffic laws were not part of the curriculum, Cervantes said. There simply wasn’t time.

Basically, it is “a course in how to survive,” the instructor said, laughing.

As the first hour came to an end, Sanchez still had a basic question. “So I put in the clutch when I hit the brakes?”

Minutes later, Cervantes was telling her to turn the key and urging her to let out the clutch slowly.

“Derechito, derecheeeeto,” he said. Roughly translated as: Straight ahead. Nice and easy.

It’s unclear whether the return of the driving exam for adults will have any effect on Mexico City’s driving culture. What would be considered bad driving in other countries — the rule-bending, bumper-riding and lane-drifting — is simply business as usual here.

Locals turn to a specialized vocabulary to describe the most egregious scofflaws. A poor driver here is a cafre. To threaten to change lanes with wanton disregard for the cars around you — essentially, threatening them with an accident if they don’t move — is to echar lámina, or throw one’s metal around.

Pedro Hoth, Mexico City’s former international affairs coordinator, believes that Mexico City’s driving style is rooted in the age of conquest, when only the Spanish and their allies had the right to ride a horse. Having a horse meant having a special claim to power.

“Today the automobile is the substitute for the horse, but the attitude is the same,” Hoth wrote in a recent email. “It’s a kind of Jekyll and Hyde syndrome, this arrogance that many drivers experience once they get behind the wheel. The inside of the car becomes a space of arbitrary power.”

The plan to reintroduce the driving test is part of a broader, dawning sense that the problem has careened out of control. In the last few years, the city has undertaken a successful anti-drunk-driving initiative, setting up roadblocks called alcoholimetros. 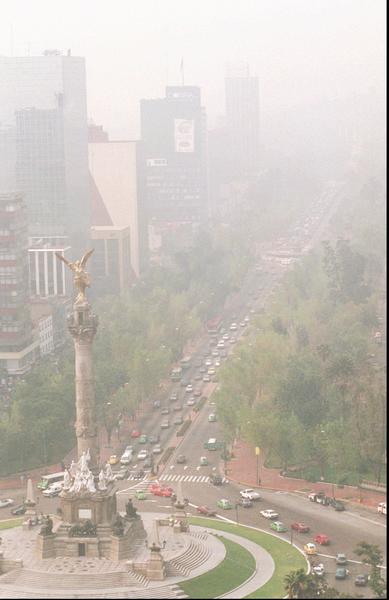 After an out-of-control gas truck crashed and exploded May 7, killing 26 residents of suburban Ecatepec, newspaper columnist Sergio Sarmiento suggested that Mexicans, who are understandably fixated on the drug-cartel-fueled culture of violence in the country, should also focus on the culture of negligence. In 2011, more than 27,000 people died in violence in Mexico, government statistics show. That same year, more than 36,000 Mexicans died in various kinds of accidents — about 16,600 of them traffic accidents.

Patricia Sanchez’s plan had always been to leave the driving to someone else. For years, she commuted to work in a cab. Her apartment in the working-class neighborhood of Iztapalapa is just a couple of blocks from a Chedraui, Mexico’s homegrown big-box store. When she needed to venture farther afield, she took the subway or asked for rides from members of her large extended family.

But some of her chauffeur relatives have become busy of late, and Sanchez realized that she needed to learn how to drive. She was encouraged by the fact that she had successfully learned how to swim in her late 40s. Her daughter gave her the money for the driving lessons as a Mother’s Day present.

She liked Pedro Cervantes’ smooth, measured way of talking her through things. Her ex-husband had tried to teach her to drive years ago, she said, “but he always ended up yelling at me.”

Now she was rolling down one of Iztapalapa’s quieter streets, feeling out the interplay of clutch and gas while going about 5 mph.

“Derechito, derecheeeeto,” Cervantes said. She stalled out on a speed bump with a violent jerk.

And so it went, Sanchez stalling her way around Iztapalapa. She stalled in front of taco stands and fruit vendors, in front of a group of schoolgirls in plaid skirts walking home. She stalled at a five-way intersection with no stop signs, giving her fellow drivers an unintentional sign that it was safe for them to go ahead of her. She stalled on her narrow, two-lane street, inexplicably scarred down the middle with a 6-inch-deep gash.

Cervantes helped her park the car. “Any doubts I can help you with?”

Good, he told her. Tomorrow, the real test: the rest of the city.

The next day, she was so nervous she had a stomachache. She had read about the gas truck accident. (Prosecutors alleged the driver was a speeding cafre; the driver alleges he was forced to swerve to avoid a bus driver who was echando lámina, throwing metal.)

Sanchez waited for Cervantes on the curb of her chewed-up street. He arrived on time and had her get behind the wheel. Soon they were off, shifting into higher gears, toward the imposing, anarchic, eight-lane arteries of Iztapalapa.

She was still struggling with the rhythm of the clutch, and it bothered her. But little else did.

The novelist David Foster Wallace once told a joke about a pair of fish who were asked how the water was today.

“What the hell is water?” one of the fish asked.

Sanchez has never lived anywhere but Mexico City. For the next two hours, the green peserominibuses would jockey within millimeters of her back bumper. A spiky-haired kid in wraparound sunglasses, in a lane to her right, would turn left in front of her at an intersection. Transfer trucks would roar on all sides. A man in a Ford Fusion would direct unprintable words her way as he raced past her passenger-side flank.

Junk-food delivery motorcycles whirred between lanes, bicyclists appeared suddenly from between taco-stand tarps. Everywhere, the city sidewalks would scream for her attention, advertising tire repair, insurance for sale, pastries, tailors, butchers and all of the homemade riches from the griddles of the street: tlacoyos, pambazos, sopes, huaraches.

“Derechito,” Cervantes told her as she navigated calmly through it all. “Derecheeeto.”

Cecilia Sanchez and Karla Tenorio Zumárraga of The Times’ Mexico City bureau contributed to this report.