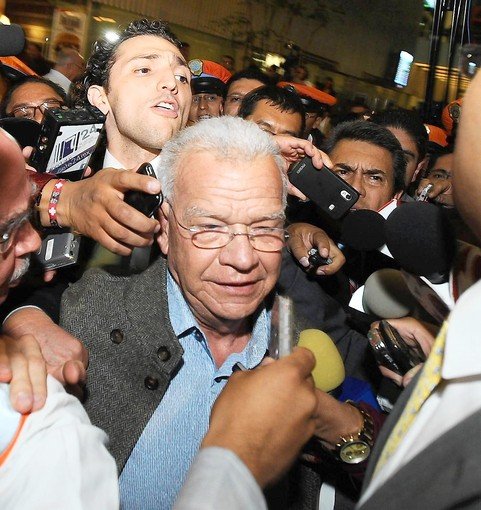 Andres Granier, ex-governor of Tabasco state, says he was drunk when he bragged that he had a luxury wardrobe of 300 suits and 400 pairs of shoes.

MEXICO CITY — It was the kind of big-man boast that would have made Jay-Z or Bo Diddley proud: He owned 300 suits, he said. Four hundred pairs of pants, 1,000 shirts and 400 pairs of shoes. He shopped Beverly Hills, Rodeo Drive, “the best of Los Angeles.”

Unfortunately for Andres Granier, the ex-governor of the state of Tabasco, his fellow Mexicans are in no mood to hear such stuff from the political class.

Granier’s comments were surreptitiously recorded in October at a Mexico City party, and they have not helped his current predicament: State and federal prosecutors are pursuing criminal investigations of whether Granier and his team mishandled millions of dollars in state funds before leaving office in December.

The probes appear to be heating up. On Saturday, federal officials arrested Granier’s former state treasurer, Jose Saiz, at the U.S. border on suspicion of embezzlement. Earlier this month, a photo of Saiz with a red Ferrari surfaced. His attorney said Saiz bought the car with money he earned in the private sector.

On Wednesday, Granier — who has said his recorded boasts were untrue and made while drunk — was in Mexico City, where he planned to give a declaration to federal prosecutors behind closed doors. He asserted his innocence shortly after flying in from his home in Miami.

“I come to clear my name,” he told reporters at the airport. “I have no reason to run.”

Mexicans are watching the investigations of the former governor and his aides closely. Granier, 65, is a member of the Institutional Revolutionary Party, or PRI, which returned to the presidency in December after a 12-year hiatus, promising it would not indulge in the kind of old-school trickery and self-enrichment that marked its seven decades of quasi-authoritarian national rule.

After the government arrested flamboyant union boss Elba Esther Gordillo on corruption charges in February, President Enrique Peña Nieto went on national television and declared that in Mexico “no one is above the law.” Mexicans are waiting to see whether the government will follow through.

If, as many suspect, there are entrenched forces within the PRI who would rather hide the party’s sins, their task is complicated by media that, in the Mexican capital at least, are more feisty than in the old days. Social media users also keep the heat on, particularly through Twitter, where they have unleashed excoriating satire directed at those who appear to be indulging in the old soberbia, or arrogance.

The Peña Nieto government appeared to get the message last month when it fired the head of the federal consumer protection agency, Humberto Benitez Treviño. Benitez had been in the hot seat after his daughter apparently called out inspectors to close down a restaurant where she had been denied a good table. The episode had turned her into a kind of Public Enemy No. 1 on Twitter.

Federal prosecutors also launched an investigation, since turned over to state authorities, of a loan scandal that left the Coahuila state government with a $3-billion debt after the term of Gov. Humberto Moreira ended in 2011. He later served as national chairman of the PRI.

In April, the Mexico City newspaper Reforma reported that Moreira was living outside Barcelona, Spain, in a luxury home with a $4,500 monthly rent. Moreira said he was living off personal savings and a pension he earned as a teacher.

Granier’s Tabasco state is one of the nation’s poorest; according to federal figures, 57% of Tabascans were living in poverty in 2010. At a news conference last month, Granier’s successor, Arturo Nuñez, who represents a coalition of leftist parties, said the financial administration of the state under Granier had been “a labyrinth of trickery, missing documentation and a debt of over 20 billion pesos” — about $1.5 billion.

Granier may find a way to prove that he broke no laws. But his assertion that his drunken boasts were untrue will probably continue to be a hard sell in a country with a popular saying that goes: Los niños y los borrachos siempre dicen la verdad. Children and drunks always tell the truth.

“Andres Granier is coming back to Mexico?” went one common joke on Twitter on Tuesday night. “How many shirts and shoes will he have in his suitcase?”

Sanchez is a news assistant in The Times’ Mexico City bureau.

Photo: Andres Granier, former governor of Mexico’s Tabasco state, arrives at the airport in Mexico City. He traveled from his home in Miami to meet with federal officials investigating the possible misuse of public funds during his term. (European Pressphoto Agency / June 13, 2013, via LA Times)