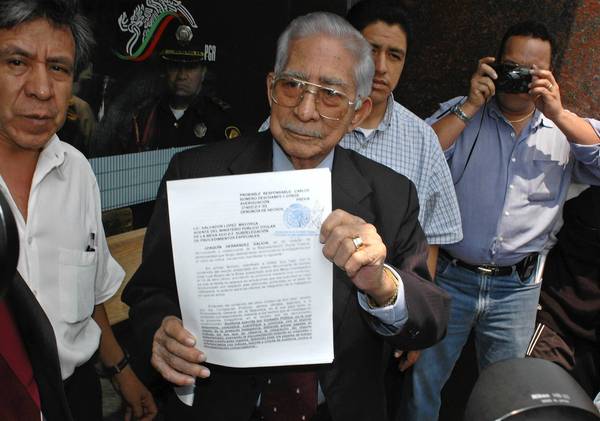 MEXICO CITY — Joaquin Hernandez Galicia, the former Mexican oil union boss who rose to control a political empire built on patronage and intimidation but was eventually dethroned by a Mexican president wary of his vast power, died Monday. He was 91.

Hernandez, who went by the nickname “La Quina,” a play on his first name, died in the port city of Tampico, where he had been hospitalized with an abdominal ailment, according to the news agency Notimex.

Both the rise of Hernandez, starting in the 1950s, and his subsequent arrest by former President Carlos Salinas de Gortari in 1989, demonstrated the legacy of the old feudal system that infected Mexican public life long after the country’s independence from Spain. His heyday was also emblematic of the unique 20th century labor system in Mexico, in which unions, instead of challenging government, were deeply integrated into a one-party political structure within which all disputes and power struggles were meant to be resolved.

Mexico has become a more democratic country in the 21st century. Even so, many of the old-school unions remain intact, including Hernandez’s union, which represents workers in the crucial, but troubled, state-run oil company, Petroleos Mexicanos, or Pemex. These vestiges of an older, less-transparent time present an ongoing challenge to those who purport to represent the forces of modernization and reform.

“Pemex was a latrine of corruption before La Quina came in, but he turned it into a sewer of corruption,” George W. Grayson, a Mexico expert at the College of William and Mary, said Monday. “And it still is.”

Hernandez was a man of slight build, the son of an oil worker who eschewed flash and who, though trained as a welder, possessed uncanny political skill. After rising to the top of the union in 1958, he maintained control by doling out favors to local politicians and everyday workers, personally receiving underlings who would ask for loans or help with marital problems.

He also had a reputation for violence. He was publicly accused of the 1977 slaying of a rival, Heriberto Kehoe Vincent, although the accusation was never proven. Two of his bodyguards also allegedly admitted to killing another rival in the 1980s.

But Hernandez’s gravest sin, at least in the eyes of the Institutional Revolutionary Party, or PRI, was to grant his nearly 200,000 members free rein to vote for the presidential candidate of their choice in the 1988 elections. The PRI, which had dominated Mexican politics for decades, nearly lost that election, with Salinas, its candidate, receiving 50.7% of the vote in a count that was suspected to be fraudulent.

In previous elections, the PRI could have counted on the union’s support, but Hernandez was concerned about Salinas’ plans to bring more efficiency to Pemex — which could have meant weakening the union.

On Jan. 10, 1989, the Salinas government, facing the threat of further intransigence from the union leader, had him arrested on weapons charges. Hernandez was also charged in the slaying of a federal agent who died in a shootout that ensued with Hernandez’s bodyguards when government officials tried to make the arrest.

Hernandez was sentenced to more than 30 years in prison, but was released under an amnesty in 1997. He had long maintained that the charges were bogus.

After his arrest, Hernandez ceased to be a player on the national stage. But his legacy lived on. Soon after the current president of Mexico, Enrique Peña Nieto, took office last December, his government arrested the old-school political boss of the teachers’ union, Elba Esther Gordillo, who potentially stood in the way of a promised educational reform.

Many observers assumed that Peña Nieto was following Salinas’ playbook in the Hernandez affair.

Peña Nieto has also proposed reforming Pemex, where Hernandez’s union continues to hold sway. Its workers enjoy some of the best perks in Mexico, including rent and gas subsidies, scholarships for their children, access to a health system of 15 clinics and 22 hospitals.

Cecilia Sanchez of The Times’ Mexico City Bureau contributed to this report.

Photo: Joaquin Hernandez Galicia in 2005. Hernandez rose to the top of the oil workers union in 1958. In the 1988 elections, he granted his workers free rein to vote for the candidates of their choice, raising the ire of the ruling party. (Roberto Velazquez, Associated Press / May 27, 2005, via LA Times)