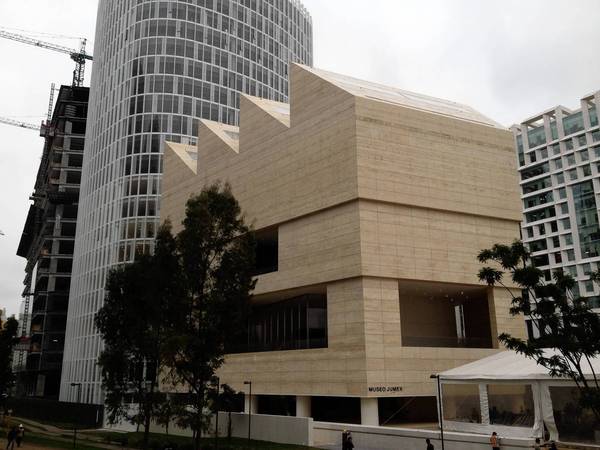 The new museum embarks on a modern art mission that stands apart from much of the Mexican capital’s steeped-in-history collections.

MEXICO CITY — The Museo Jumex, the latest museum to go up in this deliriously art-rich city, is a stout limestone box of a building, with a signature roof made up of four right triangles lined up in a jagged row. They are, almost literally, new waves.

Don’t say you haven’t been warned.

The museum, fueled by the riches of Grupo Jumex, the massive Mexican fruit juice company, opens Tuesday in a bustling, ultramodern neighborhood of glass-and-steel high rises just north of the ritzy Polanco district. It will be dedicated almost entirely to art that came after the peak of classic Modernism.

Though there are other venues for contemporary art in the Mexican capital, the Jumex, with its high-profile location and deep-pocketed patron, is likely to do more than any other to bring a shock of the new to a city largely defined by its vast troves of pre-Columbian, colonial and 20th century masterworks.

“We’re looking ahead,” Jumex collection coordinator Humberto Moro said last week as he gave a sneak peek of an inaugural exhibition dedicated to the work of the late American conceptual artist James Lee Byars. “Otherwise, we’d be building another Diego Rivera museum. Which would be great, but…”

Moro’s half-finished thought speaks volumes about the mission of the Jumex. In quintessential Mexican style, the museum takes pains to honor the past: As part of it opening activities it is releasing a book exploring the work of Fernando Gamboa, 20th century Mexico’s most important art curator and museum director. The pointy roof, meanwhile, appears to be architect David Chipperfield’s sly reference to a similar design found atop the former studio of Diego Rivera and Frida Kahlo, in the city’s San Angel district.

But the real focus of the Jumex will be on what happened long after such art giants roamed the land. Central to the museum’s mission is the display of works from the 2,600-piece Coleccion Jumex, consisting largely of art created after 1990. Assembled by Eugenio Lopez Alonso, the heir to the Grupo Jumex fortune, it is widely considered to be one of the most important collections of its kind in Latin America.

Many of the artists in the collection are Mexicans who have made a splash on the international art circuit. The new building will allow them to take center stage back home, while exhibitions by important non-Mexicans — the museum is also featuring seven Minimalist sculptures by the late American artist Fred Sandback — will give local audiences an idea of the broader world in which they operate.

“For the last 10 years, Mexico has completely inserted itself in the global contemporary art circuit,” said David Garza-Usabiaga, curator of the Museo Universitario Del Chopo, another contemporary art venue here. “I think that the Museo Jumex will reaffirm that much more.”

The museum plans to regularly rotate works from its permanent collection. The first wave of 57 pieces on display gives a good sense of what’s in store: a bull’s head rotting in a transparent box, courtesy of Damien Hirst, the 48-year-old British art star; a stack of mirrored, peach-tinted boxes, at once austere and playful, from the late American artist Donald Judd.

Nearby, along a long stretch of wall, is a 2009 installation, “The Count of the Days,” by Mexican artist Daniel Guzman, consisting of everyday household items, a few pre-Columbian designs, and a series of images that one might find in any contemporary newspaper here: mutilated bodies, beauty queens, a soccer star.

The museum’s location is its own kind of statement, set among the offices of multinational companies like General Motors and Colgate Palmolive (the United States embassy is also set to move here from the more central Paseo de la Reforma eventually). The new building is also a few steps away from the Museo Soumaya, opened in 2011 to house the art collection of Mexican tycoon Carlos Slim, one of the world’s richest men. The Soumaya is the more daring building, a swooping, aluminum covered form reminiscent of an hourglass — or the base of a toilet. But the Soumaya’s collection is a hodgepodge, including both Rodin sculptures and Slim’s coin collection. It is the Jumex that has the more focused, and daring, mission.

The staff is aware that it may be tricky to sell the masses on art’s bleeding edge. While Mexican art stars of the previous century, like Rivera, famously strove to be at once avant-garde and populist, many later strains of art have tended to be more difficult and abstruse.

Spokeswoman Mariana Huerta said that the staff has had plenty of practice fielding skepticism. For the last dozen years the collection has been showcased in a museum on the outskirts of Mexico City, in the working-class municipality of Ecatepec on the grounds of a Jumex juice plant (the original building will remain open).

The trick, she said, is not to lecture but to seek dialogue, even among doubters. “If they say, ‘I don’t like it,’ we say, ‘That’s fine. Tell me why you don’t like it,'” she said.